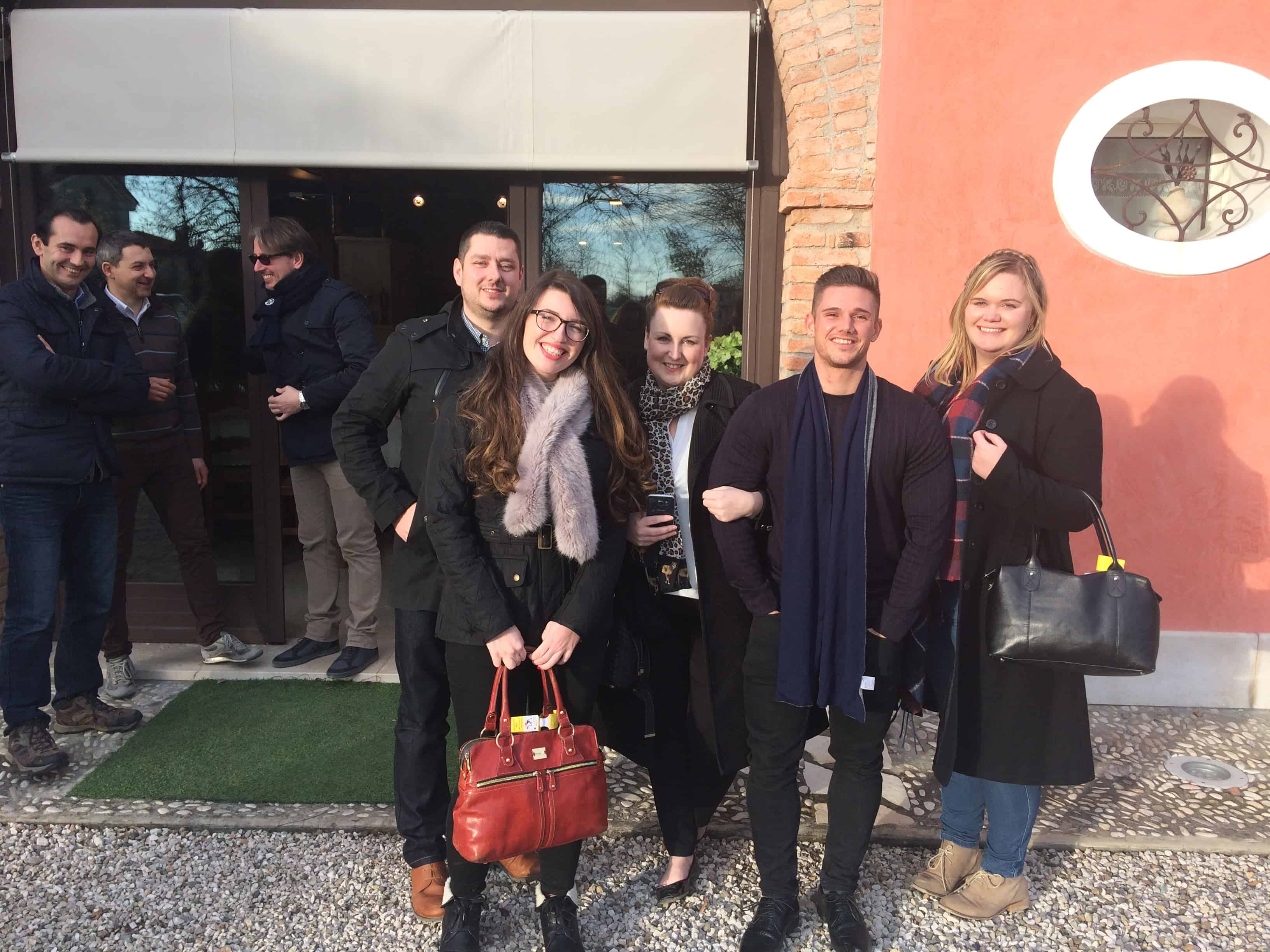 Lightmaster On Tour to Italy began early on Wednesday 18th January – the Lightmaster sales and marketing team headed off for three days in Northern Italy! We were being hosted by our biggest lighting supplier, Linea Light, who we’ve been working closely with for over 10 years.

First stop once off the plane was lunch. We were picked up from Venice airport by James Finiguerra, the director of Linea Light UK (our main contact) and Nicola Meneghetti who is the area manager for the UK, France and Germany. They took us to a stunning farm and vineyard where we were treated to a gorgeous, typically Italian lunch of antipasti, pumpkin and rosemary risotto and tiramisu accompanied by prosecco and wine produced on the vineyard.

Then it was onto our factory visit! The factory we saw was full of machines designed to test the fittings – we saw a tube full of water with a special pump designed to replicate a deep water, high pressure environment. Linea Light are one of the few suppliers we use who make IP68 fittings and so it was really interesting to see the testing process up close.

Another IP test consisted of fittings installed in a giant dishwasher – these are the IP65/66 fittings which cannot quite be submerged but can cope with being exposed to severe elements (you can clearly see the Pixar projector going around in the machine).

The final test was for IP67 and above – fittings which can withstand being submerged for a particular period of time. This was an interesting one for us as we could see well known fittings such as the Beret (Ulan) in this tank, fully submerged and had been there for several months! Nicola told us that there were some lights that had been in there since 2003.

Another feather in Linea Light’s cap is their walk-over or drive-over fittings, which literally means that you can walk or drive a car over them with no damage. The test below is how they measure a fittings capabilities to withstand different weights.

This factory was predominantly manufacturing component parts out of various metals – aluminium heat sinks, brass screws etc. These parts then git shipped to other nearby factories where the product as a whole is made. The workmanship on these parts was unbelievable!! The beauty of Linea Light compared to many of our other suppliers is that they make absolutely everything themselves: lenses, heat sinks, brackets, right down to the tiny screws holding everything together. They really put Italy on the map when it comes to craftsmanship! They really make the most of all their materials – all the waste aluminium that gets spat out the machines gets passed through a system which allows it to be used again.

While we were being shown around, we ran into the gentleman pictured below who is the big boss for the whole Linea Light Group, Angelo. His company was recently valued at 400 million Euros and Angelo still comes into work at the factory every day to help create new products and improve existing ones. Here he was working on ultra-sonic bonding for the outer casings on the IP68 rated LED tape. This bonding means the end caps can be attached without large sections of plastic being visible at each end.

Upstairs above the factory is where they do more product testing. These tests are for the interior lights and they check the capability of the heat sink, light output and life span of the LED. These rooms are HOT!! It’s like walking into a giant sunbed with all the heat and light surrounding you. There’s lights covering every surface- on tables, shelves and from bars on the ceiling while the drivers and cables powering the fittings are run along the outsides of the walls (the health and safety rules aren’t as strict in Italy as they are in the UK). We got to see all the products we know and love up close and also see some of the potential new fittings as well as old, discontinued fittings which have been on and running for over 10 years.

We also got to see Linea’s new product technology – Warm Tune. This is a new technology that plenty of people are trying to perfect. Otherwise known as dim-to-warm, Warm Tune is the process of dimming a light fittings’s light output while also lowering the kelvin colour temperature. This effect is similar to that created when dimming old fashioned dichroic lights.

The last room we saw was new product testing. There’s some really exciting new fittings which will hopefully go into production ready for sale in 2018, including a new tiny 6W Vos which our lighting designers are really excited about. The other product we really like is a downlight with absolutely no glare at all, regardless of where you stand. It’s made by creating a dome with a lip and on the inside that lip, little LED chips are located in such a way so the light shines up the surface of the inside of the dome and then the room below is lit with indirect, reflected light. Our operations manager Dan was very impressed with the fitting, pictured below. They’re also looking at another version which looks a bit like a doughnut. We discussed the possible applications for these fittings and we can see them working well in large, ultra-modern residential spaces but more within commercial settings like hotel lobby’s or office buildings.

That evening, we decided we didn’t want another three course meal after the gorgeous lunch, so James and Nicola took us to a pizzeria which, the team are all agreed, made the best pizzas we’d ever had. Mine didn’t have a tomato base and had tiny black olives, sundried tomatoes, creamy burrata mozzerella, prosciutto and a pesto drizzle and it was sublime!!

We also had a sgroppino, a delicious after dinner drink famous in Italy made of lemon sorbet, prosecco and vodka.